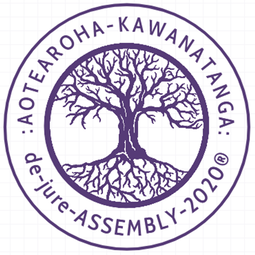 1. What is Aotearoha Kawanatanga?
Ao-Te-Aroha (World of Love) Kawanatanga (Governance) is an Ad-minister of Governing Bodies of Nations bought together in systems that have suv'eran authority, sui juris to self-determine and self-govern. Where people bring no harm to hue-manity or environment, being governed by universal lores and rules that ensure you think of others before yourself. Systems that nurture every man and womb-man, young or old, race, creed or colour.  Systems of equality to help rebuild a broken debt-base enslavement system into and self-serving credit-based nation of forward thinkers and planners to enhance the future world and it's future generations where each and every community, state or nation, locally, nationally or internationally, thrive and not just survive. For God is our Salvation. (Isaiah 12:2)
2. Does Aotearoha Kawanatanga require the mandate of the people?
Absolutely not, as the  dominion  over earth was given by Father Most High, IO Matua Te Runga Rawa for man to be caretakers. Man is only the Kaitiaki (Guardian) of God's possessions of his vineyard. We are simply the servants of the Grand Master who will provide everything we need. In saying that, it is important that we unite in common agreement, hence why we require the coming together as one (kotahitanga) in a union of peace and collective cooperation, putting animosity aside to fulfill prophecy of enjoying a paradise earth that all creatures great and small can co-exist in harmony and abundance.

If my people, which are called by my name, shall humble themselves, and pray, and seek my face, and turn from their wicked ways; then will I hear from heaven, and will forgive their sin, and will heal their land (2 Chronicles 7:14).
3. Who is in charge of Aotearoha Kawanatanga?
Aotearoha Kawanatanga is Ad-ministered by Guardians Of Divinity (GOD) who are inspired Chosen People (Māuri Crown Nation) working for the Divine Order of Te Whare Matamuatanga o IO Foundation, an unincorporated Society of private members registered on the Godzone Credit Exchange known also as the Suv'eran Smart Exchange. The Head Ad-minister is :Gavin-John: :Marsich:®©™℗, aka; :Ariki-nui-Kawenata: :Crown:®©™℗ of the :Marsich-Crown-Kingdom:®©™℗ and Co-Founder with IO Matua Te Runga Rawa, Father Most High. God's Authority is supreme. "For many are called, but few are chosen". (Matthew 22:14)
4. Who is :Gavin-John: :Marsich:®©™℗, aka; :Ariki-nui-Kawenata: :Crown:®©™℗ of the :Marsich-Crown-Kingdom:®©™℗?
His profile can be viewed HERE. He is a son of man with the divine essence of IO Matua Te Runga Rawa. He is kind and honorable in nature. A family man that is protective but loving. He has a Godly devotion to a Covenant in preparation to the arrival. His Kingdom can be viewed HERE. He is the Paramount Chief of his Kin-dom and is recognized with He Wakaminenga o nga Tino Rangatiratanga o nga Hapu o Nu Tirani [New Zealand] Aotearoa and the Maori Government of Nu Tirani, Aotearoa. He is the Co-Founder and Creator with IO Matua Te Runga Rawa of the :Suv'eran-Smart-Exchange:®©™℗ and the creator of :Te-Whare-Matamuatanga-o-IO-Aotearoha-Kawanatanga:®©™℗ and :Marsich-Crown-Kingdom:®©™℗. He is dedicated to working for the divine order and trusts he will leave a legacy for the next generations to follow. He can be followed on Facebook HERE and privately HERE. He has made his Proclamations and his Royal Ascent information can be viewed HERE.
(John 3:16)
5. What is the Assembly?
The Assembly is the gathering of Nations of Governing Bodies of people (Māuri Crown Nation) that care for the earth's environments; land, sea, air and space, in, on, above and below, visible and invisible. All lives matters, regardless of race, colour, creed, religion, gender, culture, etc. The Congregation Assemble in Congress, meeting regularly for “The Purpose of Framing Laws for the Dispensation of Justice”, “The preservation of Peace and Good Order”, and the “Regulation of Trade”. (Deuteronomy 31:1-30) - THE LAW
6. Who is the Māuri Crown Nation?
They are Chosen One's with the divine essence in their Māuri Crown suv'eran authority. People who are expected to rise up in the last days as god's shepherds and lead the lost sheep (divided nations) to salvation. A Nation of good-soul hue-man people (man and womb-man) scattered throughout the world with the holy spirit (divine essence) and mind of God who have been called to the collective gathering (Congress) or Assembly. They are not a specific chosen ethnicity as the country Israel would like you to believe, but rather IS-RA-EL means the Spirit-Mind-Body chosen before time existed.
7. Where does the Māuri Crown Nation derive their authority from?
a) Human Rights - Bible Scriptures and Un-lienable Rights.
Enclosure in No. 10.

In the preceding letter (Mr. Somes to Lord Palmerston, 7th November, 1839), the right of Great Britain to sovereignty over New Zealand is maintained on various grounds, which it is unnecessary for the purposes of this paper to controvert, or even to notice. The answers which would be made by foreign nations to such a claim are two: First, that the British Statute Book has, in the present century, in three distinct enactments declared that New Zealand is not a part of the British dominions; and, secondly, that King William IV. made the most public, solemn, and authentic declaration which it was possible to make, that New Zealand was a substantive and independent state.

The recognition by the King, Lords, and Commons of Great Britain of the fact that New Zealand is not a part of the British dominions will be found in the Statutes 57 Geo. III. cap. 53; 4 Geo. IV. cap. 96, sec. 3; and 9 Geo. IV. cap. 83, sec. 4. The following are extracts from each of those Statutes.

page 22
The Act 57 Geo. III. cap. 53 is entitled "An Act for the more effectual Punishment of Murders and Manslaughters committed in places not within His Majesty's Dominions." It sets forth, "Whereas grievous murders and manslaughters have been committed at the settlement in the Bay of Honduras, in South America, Ac.;" " and the like offences have also been committed in the South Pacific Ocean, as well on the high seas as on land, in the Islands of New Zealand and Otaheite, and in other islands, countries, and places not within His Majesty's dominions, by the masters and crews of British ships, and other persons, who have for the most part deserted from or left their ships, and have continued to live and reside amongst the inhabitants of those islands," &c.; and the Act then provides for the punishment of offences so committed "in the said Islands of New Zealand and Otaheite, or within any other islands, countries, or places not within His Majesty's dominions, nor subject to any other European State or Power," &c.

The Statute 4 Geo. IV. cap. 96, sec. 3, enacts that the Supreme Courts in the Colonies of New South Wales and Van Diemen's Land may try offences "committed in the islands of New Zealand, Otaheite, or any other island, country, or place, situate in the Indian or Pacific Oceans, and not subject to His Majesty or to any other European State," if such offences were committed by British subjects.

The Statute 9 Geo. IV. cap. 83, sec. 4, repeats that enactment in the same words, adding, only, that the punishment of the offence shall be the same as if the crime had been committed in England.

The recognition by King William IV. of New Zealand as a substantive and independent state is shown by the following narrative:--
On the 16th of November, 1831, a letter to King William IV. from thirteen chiefs of New Zealand was transmitted to Lord Goderich, praying the protection of the British Crown against the neighbouring tribes, and against British subjects residing in the Islands.
On the 14th of June, 1832, Lord Ripon dispatched Mr. Busby as British Resident, partly to protect British commerce, and partly to repress the outrages of British subjects on the Natives. His Lordship sent with Mr. Busby a letter to the chiefs, in which the King was made to address them as an independent people. Their support was requested for Mr. Busby, and they were reminded of the benefits which they would derive from "the friendship and alliance of Great Britain." (See Letters Below)

In the month of June, 1832, a Bill was brought into the House of Commons for the prevention of crimes committed by His Majesty's subjects "in New Zealand and in other islands in the Pacific not being within His Majesty's dominions." The Bill was rejected, because Parliament could not lawfully legislate for a foreign country.

On the 13th of April, 1833, the Governor of New South Wales, in obedience to Lord Ripon's order, addressed instructions to Mr. Busby, in which New Zealand was expressly mentioned as a foreign country, and Mr. Busby himself as being accredited to the chiefs. That document throughout assumes the independence of New Zealand.

On the 29th of April, 1834, General Bourke transmitted to Lord Stanley a proposal from Mr. Busby, for establishing a national flag for tribes of New Zealand, "in their collective capacity" and advised that ships built in the Island, and registered by the chiefs, should have their registers respected in their intercourse with the British possessions. Sir R. Bourke reported that he had sent three patterns of flags, one of which had been selected by the chiefs; that the chiefs had accordingly assembled, with the commanders of the British and three American ships, to witness the inauguration of the flag, at which the officers of H.M.S. "Alligator" were also present. The flag had been declared to be "the national flag" of New Zealand, and being hoisted, was saluted with twenty-one guns by the "Alligator," a British ship of war.

On the 21st of December, 1834, a Despatch was addressed to Sir R. Bourke by Lord Aberdeen, approving all those proceedings in the name of the King, and sending a copy of a letter from the Admiralty, stating that they had instructed their officers to give effect to the New Zealand registers, and to acknowledge and respect the national flag of New Zealand.
c) Internationally recognized Flag of United Tribes of Nu Tirani - 20 March 1834 - 21-Gun Salute by HMS Alligator. 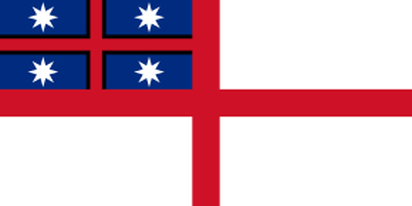